DeployHub is accessible through the following url:

Login using the UserID and Password you used when you signed up for DeployHub.

To start deploying your Applications and Components, you will first need to install a Reverse Proxy inside your firewall. This contacts DeployHub in our SaaS environment to receive deployment requests. The Reverse Proxy is required for deploying into your environment.

A Reverse Proxy queries the DeployHub SaaS every minute to determine if a deployment is needed. For SaaS users, it provides a security layer, preventing you from opening a port to the outside world. It uses standard HTTPS requests to communicate to the DeployHub SaaS on the Google GKE environment. Nothing from the external Google side of the firewall is pushed to the local DeployHub Reverse Proxy.

Once the Reverse Proxy determines that a deployment is needed, it executes the deployment using all files on the inside of the firewall. The one-way communication initiates the deployment but all work is done local to your network. On completion of the deployment, the logs are pushed back up to the DeployHub SaaS for viewing and audit. 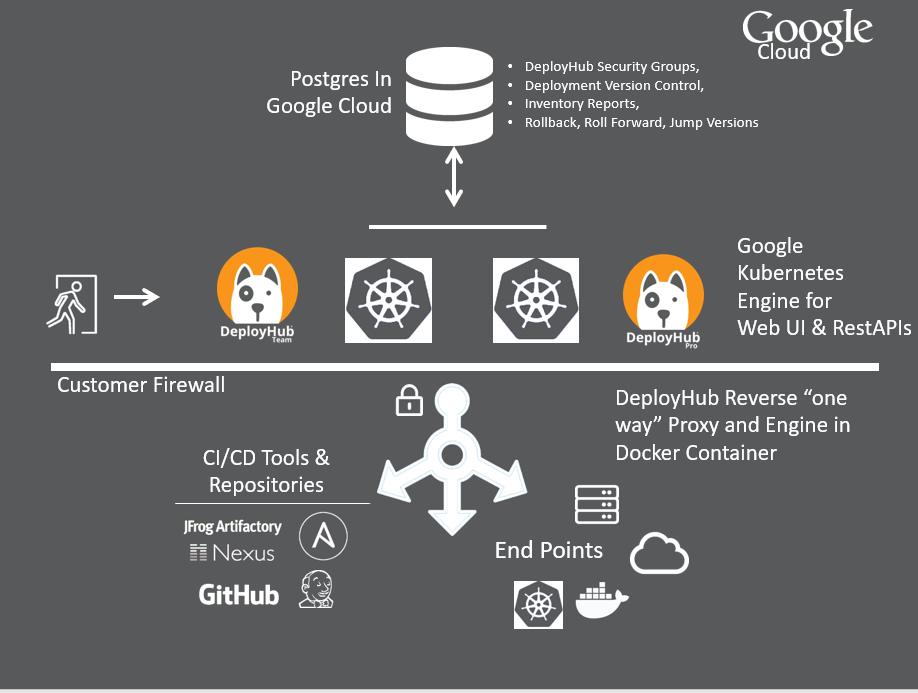 The Reverse Proxy runs as docker container. In order to install it, you need to install Docker.

The DeployHub Reverse Proxy Docker Image is found on the Redhat Quay Docker Registry. Follow the steps below to install the Reverse Proxy into your Docker installation.

Use your Client ID that you received in your “Welcome” sign up email from DeployHub. It will be a hexadecimal number such as:

Find the image SHA from the third column in the output.

Step 4 - Start the container for Linux and OS/X

Use the image SHA from Step 3 as the last parameter to the docker run.

DeployHub is accessible through the following url:

In the upper right hand corner you will see a message that should say “2 out of 2 Reverse Proxy Running.” There is a default proxy used to deploy into the DeployHub environment for the Hipster Store Tutorial.